I’d no sooner gotten in the cab from the airport to downtown Wellington, New Zealand, when the driver launched into a mini-lecture about the voracious stoat—a short-tailed weasel that has wreaked havoc on native species.

Here in the US, we think New Zealand and Australia are kissing cousins, close enough to share flora and fauna. In reality, New Zealand—or Aotearoa as it is known by the Maori—is geographically quite isolated.

As it turns out, the cab driver’s lament was to be repeated throughout my visit—and for good reason. The only indigenous mammals on the North and South Islands are bats and several dozen marine mammals. Besides the Haast’s eagle, the only birds native to New Zealand are flightless. The Maori brought dogs and Polynesian rats to New Zealand about 1250 CE. European explorers and missionaries, beginning in the late 1700’s, introduced the rest—ferrets, pigs, deer, possums. And stoats.

All of whom make easy prey of a flightless bird like the kiwi. 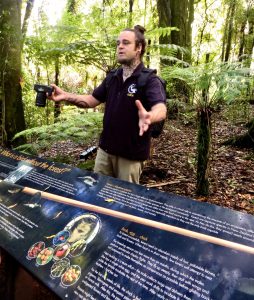 One hazy day, we visited the Maungatautari (Sacred Mountain) Eco Sanctuary. Walking up the hill toward the entrance, the first thing we noticed was the striking demarcation between cleared pasture and the 47-km pest-proof fence. Our guide, Daniel, a young man of mixed Maori and Scottish descent, ushered us into the sanctuary through a double set of entrance gates. Once inside, the light dimmed. The air stilled. In contrast to the cleared pasture outside the fence, the sanctuary is thick with silver ferns, orchids, old growth trees. As if in a meditative state, my breathing changed, my mood lightened.

Constant surveillance is required to keep the sanctuary free from unwelcome interlopers. But in that environment, endangered birds are thriving. Fruits pollinate. Seed pods sprout without the competition from non-native rodents.

I’m inspired by these efforts–to reestablish the endangered kiwi. The coot-like takahe. North Island robins. The kea—an alpine parrot. As well as native flora. And yet, it’s something of a mystery to me–how we choose what to preserve and what to cast aside. I wonder, do we demonstrate the same commitment to our human diversity? To all the peoples of the Earth? To our collective languages and culture and spiritual practices?

Between 1860 and the early 1900’s, the Maori people lost all but perhaps 5% of their land to British settlers. The Native School Act in 1867 forbid speaking the Maori language in schools and playgrounds.

I’m told it takes one generation to lose a language and three to bring it back.

I think about the implications of suddenly losing not only my home, but the very words I use to communicate, to dream, to make meaning of my world. 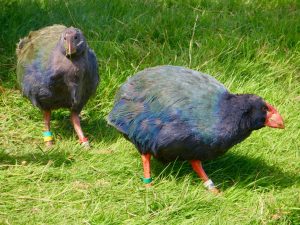 New Zealand’s efforts toward restoring resources and land taken from the Maori people have been among the world’s most sincere and committed. And yet, discrimination continues in housing, healthcare, education, justice. When I asked about the on-going challenge of meaningful reparations, I was told, “How do you give back Auckland?” Yes, it’s a challenge, but the answer implies–disparagingly–that there are those who will never be satisfied.

For many of us concerned about bio-diversity on our planet, we are anxious to protect all creatures. Our oceans. The water we drink. The air we breathe. We should be equally committed to preserving the languages and customs and peoples of our Earth. These, too, represent the richness of our diversity.

It’s not a rhetorical question to ask how much value do we place on preserving the brown kiwi? Or the black rhino? A two thousand year old kauri tree? A language spoken by a few hundred elders in a remote village? A Maori welcoming ceremony? I believe a commitment to valuing the past stands witness to our humanity.

It’s safe to say that whatever we do, it’ll never be enough. But that shouldn’t stop us from trying.

I invite you to read other travel posts about Cuba and Chiloé Island. And my novel, Thin Places.